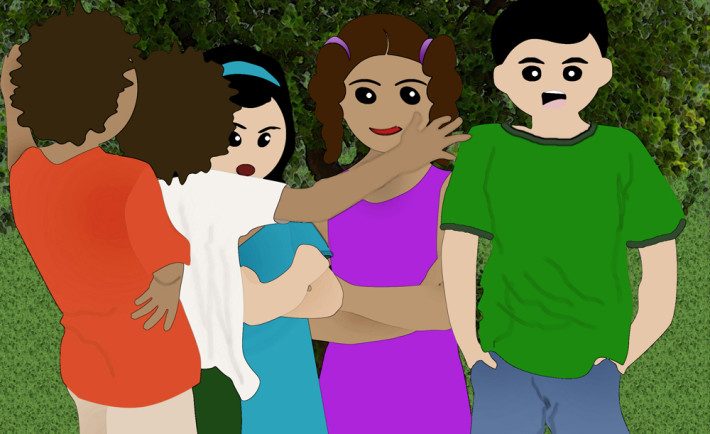 The day arrived for Cousin Harriet’s visit. The children were frantic. They called an emergency meeting to discuss how to handle the Harriet problem. There was no way that Harriet should know about the animal. There was absolutely no way she should find out.

“All I know,” said Lucy, “Cousin Harriet will find the animal if we keep it here.” She looked at Sam, waiting for him to agree with her, but he was silent.

“Be real, Sam,” continued Lucy. “Remember how nosy she is? We’re going to have to be on high alert when she gets here, or else she will spoil everything. Let Sara and the twins keep the animal.”

“I don’t think so,” said Walt. “Our mom is like a police. She finds out everything. She’s worse than Harriet.”

“Well, someone has to keep the animal. Maybe it’s our time to look after it,” said Larry, looking at his twin for agreement, but all was silent.

“I don’t know what to say,” Walt finally spoke up.

“There is nothing else to say. We should keep the animal at our house,” suggested Larry.

“Well,” said Sam, “Because I am the most responsible and best one to handle this. Besides, the animal is used to being at our house. It’ll probably get confused and make a lot of noise at your house and your parents will find out about it and it will be the end of us.”

“But if Harriet finds the animal we’ll get in trouble anyway,” said Lucy. “I think maybe Larry has a good idea. We should let them keep the animal at their house.”

“I don’t know,” said Sara. “I think Sam might be right. The animal is more used to you and Sam than to us, Lucy. It’s better if it stays with you.”

“Maybe we should build a dungeon and put Harriet in it just in case she finds the animal and threatens to tell,” suggested Walt.

The children all stared at Walt with their mouths wide open.

“Well, we have to keep her quiet right?” Walt continued. “That way, she can’t tell.”

The children all looked at each other, and then again at Walt. He looked like he meant it, and it almost sounded like a good idea.

“A dungeon?” repeated Larry. “What about if we dig a hole in the backyard and cover her up in it? All in favor raise their hands.”

All except Lucy jokingly raised their hands.

“Guys, that’s not funny. We can’t do those things. Mom will kill us. She wants us to welcome Harriet. If she disappears, mom will know we did something to her. Those ideas are not good ones at all. They are not following the golden rule. Besides, who wants to be grounded for the rest of the summer?”

“You’re right,” said Sam. We will just have to figure out what to do after Harriet gets here.”

They calmly brainstormed for a while longer, but could not come up with any new ideas.

“Maybe you guys could keep the animal in your mom’s freezer?” Sara asked.

“Though the animal is cold-blooded, it will die if we do that,” said Sam. “We’ll just have to keep it in our room and keep Harriet out.”

“I’ve got it!” said Lucy joyfully. “Let’s make a KEEP OUT sign. She’ll get the message.”

Harriet arrived in the afternoon at 12:30 on the dot. Lucy and Sam had been staying with the Logans while their parents went to pick up Harriet from the airport. They were all waiting for her to show up.

Sam and Lucy were downstairs playing with the Logan kids when their parents’ car pulled up in the driveway.

Read Animal Stowaway on Kindle for $5.99