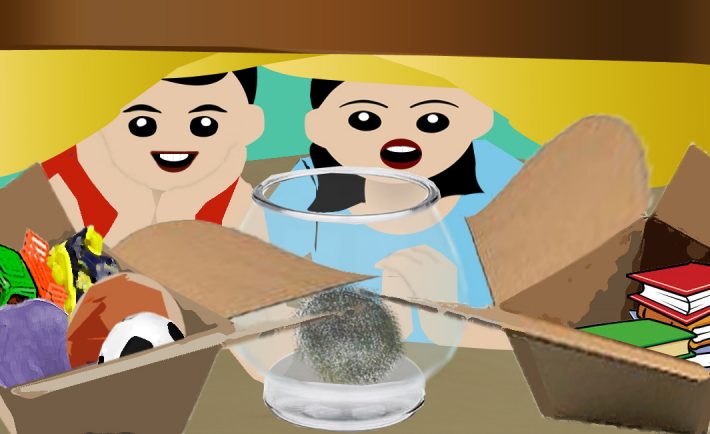 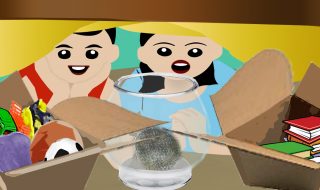 While they were lying side by side on the floor looking at the animal in the glass bottle under the bed, Lucy reminded Sam about the lizard and what their mom had said about bringing animals inside the house without permission.

“You’d better hope you don’t get caught, Sam,” she said.

“You’re in this too,” Sam reminded her. “But don’t worry, we won’t get into any trouble.”

Lucy sat up and crossed her arm over her chest. “What do you mean I’m in this too? I told you not to go into the cave remember? And I told you to put the animal back but you didn’t listen.”

Sam shook his head at his sister.

“You didn’t tell mom and dad I had the animal in my pocket, Lucy,” he pointed out. “And you brought the glass jar for me to put it in.”

Lucy knew exactly what her mother would say to that. How many times had she heard the words, “when you help someone do something wrong you become guilty of wrong right along with them”? She knew Sam was right. She was in this too. One way or another, if their parents found out about the animal she was going to be in as much trouble as Sam.

“I think we had better take it outside and set it free right now!” she said.

Sam got to his feet as though he was going to get the animal and Lucy’s heart skipped a beat.

“I think I want you to keep the animal, but I’m afraid,” said Lucy, thoroughly confused with her feelings.

Later that evening after they had finished getting ready for bed, they checked on the animal to make sure it hadn’t somehow managed to get out of the glass jar. Sam and Lucy were relieved to find that the animal was still safe and sound in the glass jar where they had left it.

“What do you think it might be?” Lucy asked Sam as they lay on the floor staring under the bed.

“I don’t know,” Sam answered. “It doesn’t look like anything I’ve ever seen before.”

“Maybe we should give it a name.”

Lucy suggested naming it Polly but Sam shook his head.

“I guess we should give it a name that can be a girl’s or a boy’s name then.”

“That’s a good idea; but we should wait until tomorrow when everybody can get together and name it. Larry, Walt and Sara might not be happy if we named it without them.”

Sam reached under the bed and pulled the jar out to take a closer look at the animal. The animal didn’t necessarily seem too concerned with being trapped inside the jar. It wasn’t making any motions as if it wanted to get out, but it was moving about in the jar as if looking for something in the corners.

“We’d better try to feed it something.  I wonder what it eats.”

Sam laid down flat and put his face right up to the glass as he watched the animal.

“I wish I could figure out what type of animal it is. Then I’d have an idea what it might eat.”

“I guess we can try to feed it both.”

Sam left the room and returned a moment later with a small carrot and a small bowl filled with milk.

“I couldn’t find any nuts.”

“I think nuts would be too hard for it to eat anyway,” said Lucy.

Read the full book on Kindle